IN A SOUL MANSION! 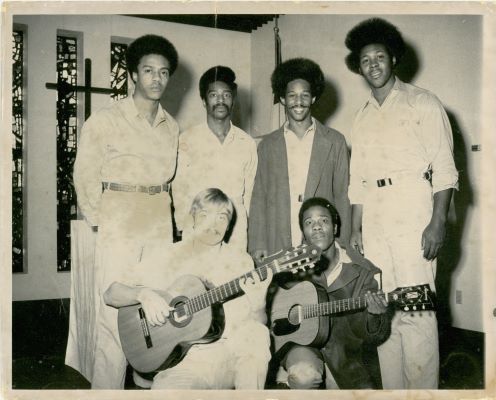 Latest 7” release from SOUL JUNCTION RECORDS features two splendid sides from little known harmony group, THE MANSION (above). The band were one of several soul combos that first came together in prison! I guess the most famous are the Escorts.

The Mansion were formed in 1970 in the Green Bay Reformatory at Allouez, Wisconsin and at various times they featured Charles Lorenzo Blakely, Michael Locke, Stanley Newburn, Carl Anderson, John Crawford, Michael Smith, Larry Moses, Ronald Hardin, Jerome Wagner, Larry Lister and Maurice Payne. The story goes that one day whilst rehearsing, the prison soul group caught the attention of the governor’s wife who was showing some VIPs round. Hastily named, The Mansion, the fledgling group were invited to sing on the local Allouez TV station. A few more (well-guarded) performances outside the prison brought the band to the attention of Milwaukee’s Al Dunlap of the Commando Project One. He used his local clout to get the boys into a studio where they cut two sides – ‘The Girl Next Door’ /’Stop! Let Your Heart Be Your Guide’. The two cuts made up the band’s solitary single released in 1974 on Milwaukee label Gibbs and they’re the songs featured on the Soul Junction 7”.

‘The Girl Next Door’ is a super, sweet harmony ballad. The lead vocal soars in best 70s fashion while the rest of the band lay down tight harmonies, honed, I guess, in the prison yard! ‘Stop Let Your Heart Be Your Guide’ is another harmony masterclass with (to these ears at least) a different lead voice. Soul collectors might recognize the songs as they were previously released by Soul Junction on a CD compilation, ‘We Got A Sweet Thing Going On Volume II’ – and yep, both sure are “sweet”!

The original Gibbs label release is ultra-rare. If you can find one, expect to shell out in excess of £300! Of course, it’s what’s in the grooves that counts, and you can enjoy both songs with pristine sound on the Soul Junction release when it comes out on November 7th.

As a footnote when Charles Blakely was moved to another prison he formed a gospel group, called the Bell Tones whose line up included Charles, Mayweather Lee, Joe Hayes, and Levell Rudd. The formation of this group was seen as major factor in Charles’s rehabilitation which led to his eventual parole in 1976. Out of jail, Charles formed another group, the Final Chapter who released a single on the New World label. The group disbanded in 1987 and we believe that Charles died in October 2018. Three Final Chapter tracks feature on the aforementioned ‘We Got A Sweet Thing Going On Volume II’. Two of the cuts offer more classic harmony, though the third, ‘Merry Go Round Of Love’ is an instrumental! If you’re a serious soul collector, all are worth seeking out. Go to  https://www.souljunctionrecords.co.uk/ to see if they have any of the compilations still  in stock and, of course, to pre-order the Mansion single.