IN A BRAZILIAN WAY! 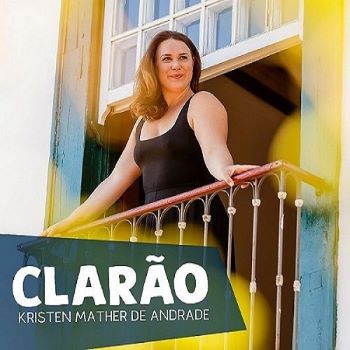 If you’re a World Music lover and fancy something a little different to ease you through the back end of August, you may want to investigate the debut solo album from clarinettist/vocalist KRISTEN MATHER de ANDRADE; it’s called ‘Clarão’.

New York based clarinettist, Ms de Andrade fell for Brazilian music at a young age. She married a Brazilian, learned Portuguese and immersed herself in the culture of her husband’s birth land, quickly learning her way round Brazil’s varied musical cultures and realising that many Brazilian music forms lent themselves perfectly to the clarinet.

A couple of years ago she started to record her own versions of classic Brazilian “choros” (the word derives from “cry” or “lament”) finding the time for the task between her stints in the West Point Army special Band – she’s the ensemble’s principal clarinettist. After plenty of coronavirus setbacks, Kristen’s labour of love has finally won release and ‘Clarão’ is an honest take on a very  particular Brazilian art from, though it’s also surprising in its diversity.

Ms de Andrade says: “I wanted to show the diversity of Brazil in the music selections on this album. L learned so much from my producer, Sergio Krakowski, who really helped me dig deeper into the styles that I was already familiar with and find some music that was really interesting and would flatter the band. I wanted to showcase music beyond Bossa Nova and bring attention to some amazing styles and composers that I have found so inspiring”.