IN A BLUE EMBRACE… 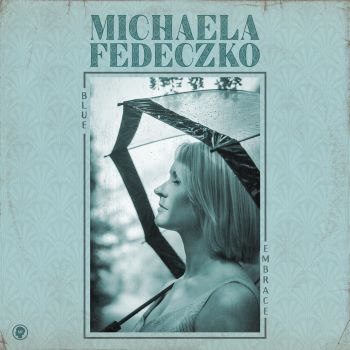 MICHAELA FEDECZKO is a Bristol-based singer/songwriter who’s built up a strong portfolio of live gigs. She’s worked all over the UK, France, Dubai and Israel and appeared at Glastonbury.

Michaela’s career now steps up a gear as she releases her debut album – ‘Blue Embrace’ – a ten track mix of introspection, poignant ballads and sweet grooves all delivered with a garnish of blue-eyed soul; hardly surprising as Ms F cites her parents’ Motown and soul records as a major influence.

The ‘Blue Embrace’ LP was preceded by a pair of singles…. ‘Give Me Something’ and ‘Who Am I?’ The former is a mellow, mid-tempo groove with sweet harmonies and a hint of Corinne Bailey Rae. The latter  has a touch of gospel about it via the finger-clicked, harmonic opening. The gospel accents are more pronounced on the building, rousing, hand-clapping ‘I Love You I Do’.

Elsewhere, ‘I Needed You’ stands out as a gentle earworm with an insistent vibe while ‘Thinking It Over’ is the most poignant of the ballads – an atmosphere accented by some sweet, muted flugelhorn from Pete Judge.

Michaela Fedeczko’s ‘Blue Embrace’ is a gentle, unprepossessing long player; one of those which could so easily slip under the radar. However, if you’re looking for a little sonic comfort in these difficult times, the ten tracker offers some reassurance and a modicum of optimism.

Michaela says: “’Blue Embrace’ for me is the idea of looking at life, both the light and the dark moments, and learning to embrace it all. So much has happened over the time I have made this album and lots of my lived experiences and that of people close to me are in these songs. I have grown and learnt so much. My hope is that you find comfort amongst the music and your own, Blue Embrace.” It’s out now.