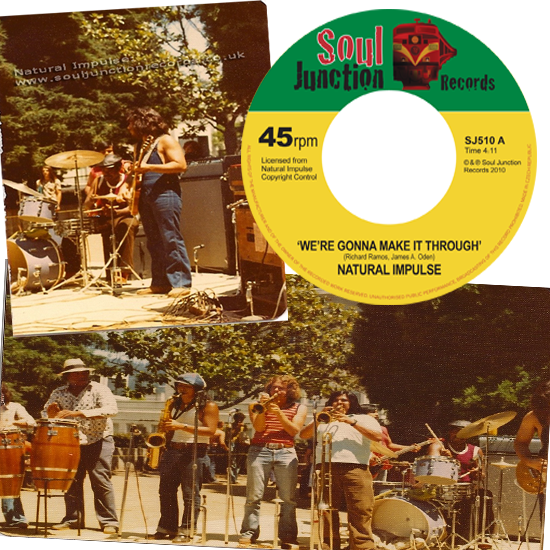 The SOUL JUNCTION label’s latest release is a sweet little vinyl seven incher on 70s underground favourites NATURAL IMPULSE. The label released the band’s ‘She Went Away’ two years ago and it immediately became an underground soul classic.

This new release features a pair of top, old school soul tunes with the A-side being a fab uptempo groove… ‘We’re Gonna Make It Through’. The b-side features the more funk orientated ‘Make It Or Break It’ – here in an edited version of the original six minute long studio take. Both cuts have a real TOWER OF POWER flavour to them and the SOUL JUNCTION people tell us we’re lucky to have the tunes.

It seems JESUS (JESS) GONZALES – the bass guitarist with NATURAL IMPULSE – was sorting out some items to donate to a local charity and came across an old cassette player. He opened it up and discovered that it still contained a cassette. He played it and to his delight he found three forgotten, unissued tracks that had been laid down during the 70s only to have laid gathering dust for the last 32 years. JESS eventually contacted SOUL JUNCTION and the record is now available for all soulsters to enjoy

For more info go to www.souljunctionrecords.co.uk