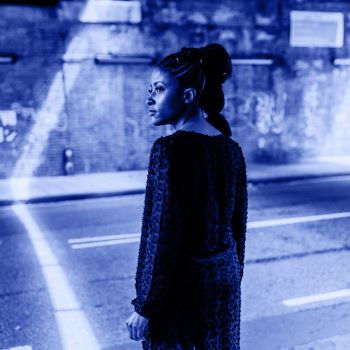 JOSEPHINE ONIYAMA is a contemporary soul singer. Born and raised in Manchester, she now works out of music city UK, Liverpool and why wouldn’t you! The city is forever a-buzz with new music ideas and you can hear that buzz alongside plenty of energy and envelope-pushing on her latest single – an electro-charged yet emotional ‘Human’ . Josephine says that the song is “literally about having someone else there with you, physically. Another human being in the room, talking to another face. Someone that can be touched and touch you back. A no phones and no screens reality.” It’s a refreshing riposte to those whose lives are dominated by social media and so called “friends” . It’s an appeal for real love – Josephine calls that “love” “a simple game” and advocates getting  back to feeling “skin on skin” rather than communicating screen to screen. A great and sensible idea but not sure what sort of success her appeal will have despite her urgent and passionate delivery!

‘Human’ is the follow up to the equally urgent ‘Tears Will Never Be Mine’ which won plenty of support on local airwaves. Both songs are taken from the singer’s current EP, which is named  for ‘Human’. The four tracker shows Josephine’s versatility and betrays he influences which she cites as people like Grace Jones, Lana Del Rey, Alison Krauss, Bob Marley, Sister Rosetta Tharpe and Joni Mitchell. Indeed there’s a Joni Micthell timbre to Ms O’s vocals while the provocative nature of her lyrics echo Mitchell’s oeuvre.

JOSEPHINE ONIYAMA; Human out now via Sound Of Solar Records