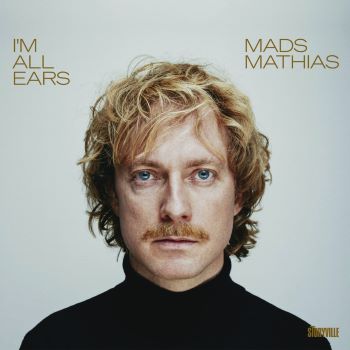 MADS MATHIAS is an acclaimed Danish singer/saxophonist who’s just released his second long player, ‘I’m All Ears’. The album features nine original songs  where the inspiration was the music of the classic big band swing era.

Sonically, ‘I’m All Ears’ offers plenty of swing and lounge jazz but lyrically, the collection is very different. Where the music of that classic era (usually) spoke of romance, ‘I’m All Ears’ (in Mathias’ own words) “tells wistful tales of navigating an increasingly polarized world”. So,fpr example, the LP title track references Mads’s intuitive approach to music, having lived part of his life in Tanzania, where his love for beats, rhythm and swing originated while ‘Marigold’ (Mads says) is “ a poetic insight into how fast children grow up and the fear of a parent having to let them go.”.

He adds that  each song lyric a snapshot, a vignette from his own experiences. Those stories, coupled with the jazz settings offer plenty of intrigue!

‘I’m All Ears ‘is out now via Storyville Records.