IKE AND TINA … THE HITS? 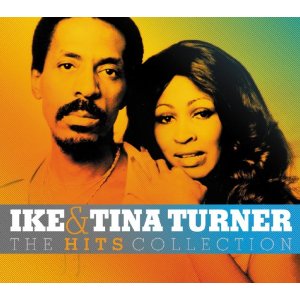 Music Club Deluxe’s latest soul-related release is something of an oddity… and a misleadingly named oddity at that. The 2 CD 36 tracker features IKE AND TINA TURNER and is called ‘The Hits Collection’…. however, it doesn’t really feature any hits!

The story behind the music here is complicated but with a business track record like IKE TURNER’S you’d probably expect that. The 36 tracks on the album were all recorded in the mid 70s at IKE TURNER’S own Bolic Sound Studios in Inglewood, California. Though he peddled them around a number of labels they didn’t gain a release till the 80s when the Saja label put them out under the title ‘Greatest Hits Vols 1-3’. The album bombed – chiefly because it didn’t feature any authentic IKE AND TINA hits – just re-recordings of some of them – like ‘It’s Gonna Work Out Fine’ and ‘Proud Mary’. Then there were lots of covers of other peoples’ hits – like EDDIE FLOYD’S ‘Knock On Wood’, DOBIE GRAY’S ‘Drift Away’ and LITTLE EVA’S ‘Locomotion’. All are delivered in the duo’s customary gutsy way and over the years the tracks have become very collectable…. hence the raison d’être for this release. The set retails at around a fiver – so you make up your own minds about the credibility of it all.