IF YOU REALLY WANT RAUL….. 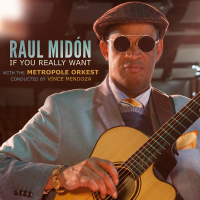 New Mexico’s RAUL MIDON is considered by those in the musical know as the “artists’ artist” – critically acclaimed but not that well known in the mainstream… maybe because his music is so eclectic? Possibly that’s down to his upbringing… you see Raul was one of twins and, both blinded at birth, their Argentinean father used music as a therapy but it was Raul who went onto pursue a music career (his brother by the way works for NASA!).

Midon made his album debut in 2005 with ‘State Of Mind’ and though praised critically it didn’t quite take off… maybe because it was hard to pigeon-hole – jazz, soul, Latin, folk, West coast pop and more…. it was all in the mix. Since that debut, Raul has gradually won a larger audience and last year’s ‘Bad Ass And Blind’ won him a Grammy nomination.

Now our man’s just released a new set, his tenth LP, ‘If You Really Want’ and hopefully this might be the one to finally break RM. Already some of the more savvy and sophisticated soul stations are rotating  ‘Sunshine I Can Fly’ and ‘Pick Somebody Up’. That latter a proper modern soul tune with a real uplift and a gorgeous but all too short trumpet solo.

‘If You Want’ though is a cross genre album and like all Midon’s output hard to categorize. And speaking of his output, Midon fans will recognize many of the songs here. All but four of the tunes on the ten tracker are “Midon oldies”. What he does here is put them into new settings courtesy of the Award-winning Dutch ensemble, Metropole Orkest, under the direction of Vince Mendoza.

Apart from the two cuts mentioned other highlights include the Paul Simon flavoured ‘Ride On A Rainbow’, the Jobim-nunanced ‘All Love Is Blind’ and the ethereal ‘Ocean Dreamer’.

RAUL MIDON; ‘If You Really Want’ is out now on Artistry Records.