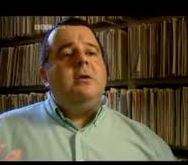 IAN LEVINE – for many years a major and influential player on the UK soul scene- has suffered what appears to be a debilitating stroke. Details are vague since it seems that Levine and his family wanted to keep the sad news out of the media. It seems that the information was leaked out, oddly, via a Dr Who fan forum website (Levine was an avid Dr Who fan and collector of “lost” episodes). Despite being hospitalised Levine posted the following message:

“As many of my close friends know, I am in hospital having suffered a major stroke. The left side of my body is paralysed and I am bitterly unhappy and resentful. I did not want this making public, but the last person in the world who I wanted to know, Philip Morris (fellow Dr Who collector), has seen fit to tell the whole world against my wishes. I am very upset over this, so therefore have to own up what happened. I am fighting hard to recover the use of my foot but may never get my hand back…. Keep your fingers crossed for me.”

Ian Levine was born into a wealthy family who ran nightclubs in Blackpool. He began collecting Motown records from the age of 13 and once claimed he owned every Motown issued 45! His love of Motown drew him to the Northern soul scene and he began DJ-ing at the Blackpool Mecca. There he played the usual Northern fare but soon began playing exclusive singles that he’d sourced during his family holidays in the States, often “covering up” the discs to keep them exclusive and to prevent other DJs getting hold of them (the atmosphere on the scene then was particularly cut throat between rival DJs.) Since many of these “Levine exclusives” weren’t the usual Northern oldies he was helping to steer the scene into a new, “modern” direction and many Northern devotees never forgave him for it!

Openly gay, in 1979, Levine began advising London’s gay disco, Heaven, on its music and he became the club’s first resident DJ, remaining there through most of the 1980s. He also began producing his own records – often using veteran Motown performers on new versions of their in-demand favourites. From there Levine moved into what became known as Hi-NRG music … he even produced Take That’s first three singles, managed bands and worked for a while with Simon Cowell.

Levine is also an enthusiastic Dr Who fan and an avid collector of American DC comics, claiming to have the only complete set of DC Comics in the world, with at least one copy of each DC comic book sold at retail from the 1930s to present. A far cry maybe from the quirky world of Northern soul, its rivalries and tensions, but souljazzandfunk are sure that whatever side of the Northern soul divide you’re on, all real soul fans will wish Ian Levine a swift recovery.