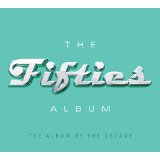 The Fifties’ set offers 70 tracks across 3 CDs and from the perspective of SOULANDJAZZANDFUNK there are plenty of sounds here that were to influence and shape what we came to know and love as soul music. Stand out track in that context is Ray Charles’ monumental ‘What’d I Say’ – with its melding of gospel and R&R and delivered with full-on call and response passion, it’s often cited as the first soul single. Other embryonic soulsters featured include the Coasters and the Clovers. Lashings of great pop too – from legends like the Everly Brothers, Jerry Lee Lewis, Carl Perkins, the Crickets, Paul Anka and good old Cliff Richard! The opening track by the way is Dean Martin’s ‘Memories Are Made Of This’… very apt!

The Sixties collection, as you’d imagine, is stuffed with loads and loads of classic soul. There are iconic tunes from stars like Otis Redding, Percy Sledge, Aretha Franklin, the Drifters, Eddie Floyd and Jackie Wilson while Motown is represented by the Supremes, Four Tops and Martha and the Vandellas. You can probably guess the selected songs but they all still sound vital and presented en bloc like this you re-realise why the sixties have always been musically lionised.

Licensing issues mean nothing from the Beatles, but that omission is made up for by dozens more beat group classics…. stuff like the Swinging Blue Jeans’ ‘Hippy Hippy Shake’, the Hollies’ ‘Just One Look’ and Gerry and the Pacemakers’ anthem ‘You’ll Never Walk Alone’. Our American pop cousins are represented by artists like the Beach Boys, The Righteous Brothers, The Byrds and the Monkees.

Soul on the Seventies album is represented by, amongst others, Rose Royce, Tami Lyn, Sister Sledge, Chaka Khan, Chic, Van McCoy and Candi Station while you also get ska-tinged classics from Madness and the Specials. Pop offerings range from the Bee Gees’ ‘How Deep Is Your Love’ through to Fleetwood Mac’s ‘Don’t Stop’ with dozens and dozens of other classics in between. There are 64 tracks in total… and yes, Dean Martin was right, ‘Memories are made of this!‘ Making those memories sweeter, expect to pay between £10 – £13 for each collection.