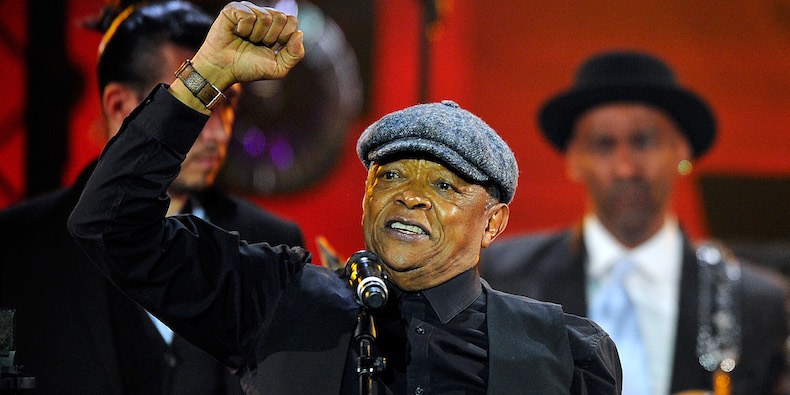 Mould-breaking South African trumpeter HUGH MASEKELA died on Tuesday 23rd January in Johannesburg. He was 78 and his family said that Hugh had “passed peacefully after a protracted and courageous battle with prostate cancer”.

Born in Wittbank, South Africa in 1939, Hugh Masekela came to be known as the father of South African jazz. He was also a leader in the fight against apartheid while in soul circles he’s best remembered for his wonderful version of ‘Grazing In The Grass’.

As a young man, it’s said that Hugh decided to take up the trumpet after seeing a movie about Bix Beiderbecke (1950’s ‘The Man with The Golden Horn’). His teacher, the doughty anti-apartheid campaigner Father Trevor Huddleston bought him his first trumpet; though to progress on the instrument he left South Africa. He was away for 30 years – he called this period “his exile”.

Tutored in the States, he developed a unique style and after playing the Monterey Pop Festival, his wonderfully optimistic 1968 recording of ‘Grazing In The Grass’ became a worldwide hit (it was also, of course, successful in a vocal version by the Friends Of Distinction). Countless other recordings (many with a political theme) won Masekela huge acclaim and a welter of awards.

Masekela eventually returned to South Africa after the release of Nelson Mandela. In his homeland he was revered as a music giant and in 2010 he performed at the opening ceremony of the World Cup.

South African president Jacob Zuma said Hugh Masekela’s death was “an immeasurable loss to the music industry and to the country at large“. His active career lasted over sixty years and Masekela was one of the rare few musicians to develop a unique and instantly recognizable sound. Not only that, he was also a constant campaigner against social and political injustice. Even in his last years he was a tireless campaigner for men to be cancer aware and to seek regular check ups.