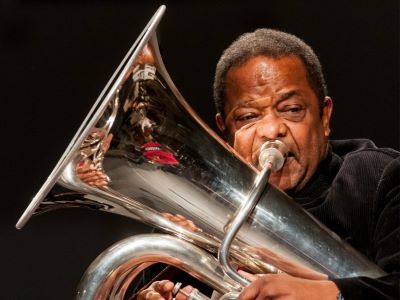 Celebrated jazz tuba player HOWARD JOHNSON died on Monday 11th January. He passed at his New York home following what was described as “a long, unspecified illness.”. He was 79 and the announcement of his death was made via Facebook by Nancy Olewine, who described herself as Johnson’s “beloved partner of many years.”

Johnson was born in Montgomery, Alabama in 1941 and in the 60s he worked with people like Hank Crawford, Charles Mingus, Archie Shepp, Gary Burton, Charlie Haden, Gil Evans and Pharoah Sanders. In the late 60s he teamed up with bluesman Taj Mahal for Mahal’s eponymous 1968 LP. The pair became regular collaborators.

Such was Johnson’s status that his playing (tuba and sax) was in demand from a plethora of musicians across genres. In his career amongst those he worked with were The Band, John Lennon, Miles Davis, Jaco Pastorius, Marvin Gaye and Muddy Waters. Johnson also worked solo but didn’t release his first album till 1994. It was ‘Arrival: A Pharoah Sanders Tribute’ which was then followed by ‘Gravity!!!’ (1995), ‘Right Now’(1998) and ‘Testimony’ (2017). Johnson also served as the conductor of the ‘Saturday Night Live’ house band during the programme’s early years.

In Ms Olewine’s Facebook post, she wrote, “During his remarkable life, Howard dedicated himself to creating a distinctive jazz legacy, and to advancing the stature and versatility of his signature instrument, the tuba.”