HOW GOOD IT IS… 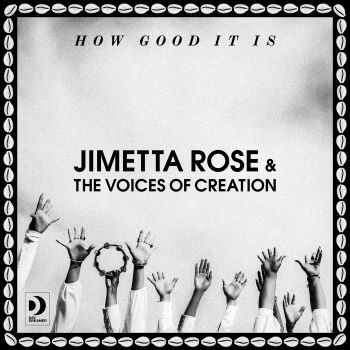 All proper soul collectors know real soul music and gospel are intertwined… the former could never have evolved without the latter. And to prove that (obvious) fact we’d like to point you to an upcoming gospel album from , L.A.’s THE VOICES OF CREATION, ‘How Good It Is’

The choir consists of mainly non-professional singers and are marshalled by JIMETTA ROSE. Ms Rose is a vocalist, songwriter, arranger, producer and mainstay of the Los Angeles gospel circuit. Just a few years ago she was enduring a tough time : ”I was very low  and I wrote some songs going through hardship. But I found comfort in the songs and a way to adjust my mindset to where things got better. So I thought ‘if this music works for me, maybe it will work for other people’ I believe that every person has their own voice and their own note and that we can use our voices to heal ourselves. That’s the intention behind creating the project.”  Jimetta then put out a social media call to find people interested  in joining a choir to record the songs. She was inundated with replies. She says: “I recruited people based on their interest in healing themselves and others, not necessarily on their musical experience or being seasoned performers”. Among those accepted into the ever-evolving collective, which was begun initially as a community choir,  was Sly Stone’s daughter Novena Carmel.

Working with producer Mario Caldato Jr, the choir, now named The Voices of Creation began recording – not just Jimetta’s songs but some well-chosen covers. One of those covers- a version of the Sons and Daughters of Lite’s 1978 classic ‘Let The Sunshine In’ has just been released as the album’s leadoff single. It’s a joyous piece, replete with dynamic group harmonies and a passionate lead.

Amongst other tracks on the mini album is an uplifting take on Rahsaan Roland Kirk’s choral jazz classic ‘Spirits Up Above’ while Jimetta’s own ‘How Good It Is’ is another highlight. Perhaps the most surprising inclusion though is ‘Answer The Call’ – a haunting, moody, builder that is based on Funkadelic’s ‘Cosmic Slop’!

The six track album, which was recorded in a church in East Pasadena, California, is a gospel set, for sure. But’s it’s a new kind of gospel. Just as the Staple Singers and later the Sounds of Blackness redefined the genre, the Voices of Creation follow suit. And there’s something indefinably moving in the sound of massed voices joined in a celebration. The Voices’ PR people call their music “a sonic healing balm for the soul”. Amen.

The single, ‘Let The Sunshine In’ is out now and the full ‘How Good It Is’ album follows August 12th via the Night Dreamer label.