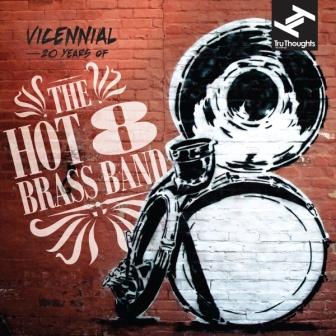 The funk n soul oddity that is New Orleans’ HOT 8 BRASS BAND are currently celebrating their 20th anniversary and the centrepiece of the celebrations is a new long player – ‘Vicennial’… a mix of new tunes and fresh recordings of their own classics like their take on ‘Sexual Healing’.

Amongst the brand new stuff is the band’s cover of the Temptations’ ‘Papa Was A Rolling Stone’. The outfit give it a typically idiosyncratic treatment that though retaining the roots of the original creates a new piece of work! It’s the album’s leadoff single and is already doing good business on US radio.

Another album highlight is a cover of a second Tempts’ song – ‘Just My Imagination’. Most soul folk love the song and though this version is, well, “different”, it’s almost as appealing.