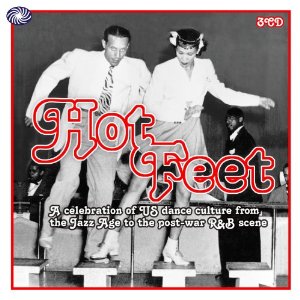 R&B is one of music’s most misused and abused terms. Nowadays it covers a multitude of styles (and sins) – especially in the US where almost anything associated with black music is dubbed “R&B”. But back in the day things were simpler. In the late 40s and early 50s, with “R&B”, what you saw was what you got- i.e. a hugely enjoyable and uplifting music that had its basis in the blues but then quite transformed them with intoxicating, foot tapping, rustic rhythms melded with a good-time urban veneer.

In the last couple of years there’s been a resurgence of interest in real, authentic R&B with clubs specialising in playing the sounds and CD compilation following CD compilation to satisfy the interest. The newest one is a massive 60 track, triple CD on Fantastic Voyage Records. Aptly dubbed ‘Hot Feet’, it’s stuffed with unpretentious sounds from people like FREDDIE SLACK, AMOS MILBURN and LOUIS JORDAN while the jazzier end of the scene is represented with cuts from LIONEL HAMPTON, COUNT BASIE and DUKE ELLINGTON. There’s also some inclusions that aren’t R&B – but things like the ANDREWS SISTERS’ ‘Boogie Woogie Bugle Boy’ were just as much a part of that whole late 40s/early 50s music scene and are totally appropriate in the context of the Lindy Hop, the Jitterbug , the Slow Drag and the Funky Butt.