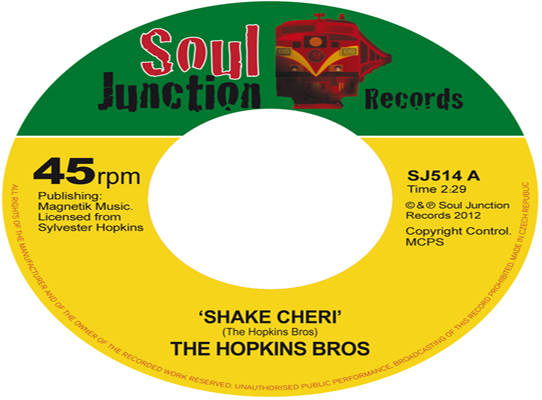 One of the most current in-demand singles on the UK and European underground soul scenes is ‘Shake Cheri’ from THE HOPKINS BROS. The brothers – FRANK, SYLVESTER, and the, late ARTHUR (aka “COUNT HOPKINS”) hailed from New Haven, Connecticut and have a longevity that goes back to the doo-wop era when they performed with THE CHESTNUTS, THE SCARLETS and FRED PARRIS and the FIVE SATINS.

As the HOPKINS BROS they recorded just one single – 1970’s ‘Kiss Of Fire’/ ‘Shake Cheri’ for the small Magnetik label and outside of Connecticut it meant very little. But as is often the way, a few copies surfaced in Europe where it became a cult, collector’s item.

The single has just gained a proper, re- release courtesy if the UK’s Soul Junction Records and anyone who wants to enjoy its authentic soul sound can now do so at a reasonable price! Soul Junction are going with the busy, broody beater that is ‘Shake Cheri’ as the A-side, with a previously unissued mix of ‘Kiss Of Fire’ as the flip. That one is a fine harmony ballad with a touch of the ESQUIRES about it and worth collecting in its own right.

For more information go to www.souljunctionrecords.co.uk