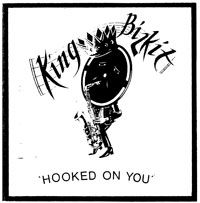 KING BIZKIT are one of the UK’s longest standing and hardest gigging soul and blues bands. Later this year they’ll be releasing a new, full album – ‘Selling My Soul – but in the meantime collectors will need to know that one of the band’s most in-demand back catalogue items has just been reissued. In 1992 the BIZKIT boys played a live session for PAUL JONES BBC Radio Blues Show and the four tracks were given a limited commercial release. The EP soon sold out and was deleted but it’s now once more available. The four cuts (which include a cover of JOHN MAYALL’S ‘Another Kind Of Love’ and the Stax-inspired ‘Hooked On You’ ) represent KING BIZIKIT at their driving best and over the coming year the band will also release a quartet of live albums in the run up to the release of ‘Selling My Soul’. For more information on the EP and the albums go to www.kingbizkit.com