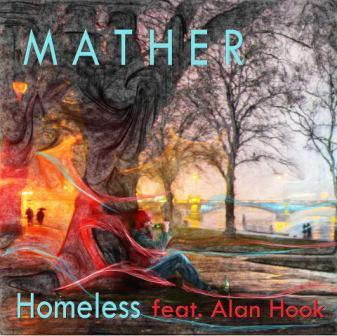 Over the past few years (Stuart) MATHER has won lots of friends in the soul community. Working both as Mather and Kingdon and out on his own, he’s issued a slew of classy singles and a fine album, ‘No Looking Back’.

Mather’s latest outing is a little different to his norm – a haunting ballad, ‘Homeless’. The song tells of the plight of a young man who has lost everything after been drawn in to a world of addiction.

Helping Stuart deliver is sax man Alan Hook while the art work came from the studio of Jenny Cottingham. Jenny asked Stuart that rather than pay her for her work, he should make a sizeable donation to charity. So Stuart decided that monies received from the sale and royalties for this track be donated to the homeless charity ‘Shelter’. Alan Hook came on board too, as did the promotion man Gary van Den Bussche….

Mather – Homeless – for the Shelter Charity is out now