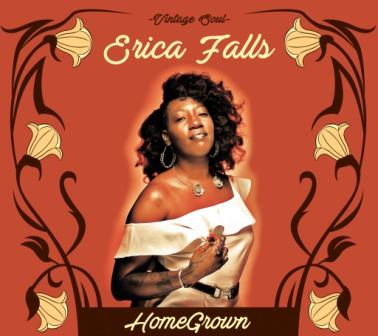 ‘HomeGrown’ (yes, no gap) is the title of the brand new album from New Orleans’ soulstress ERICA FALLS. Erica made her solo debut in 2012 but gigging as vocalist with Galactic (see our recent feature on the band’s drummer, Stanton Moore) has meant that getting time to record a follow up was tight.

Anyway, five years down the line ‘HomeGrown’ is good to go and will be available from July 7th. The ten tracker has been produced by Grammy winner Donald Ramsey and as far as a modern soul album goes, it ticks all the boxes.

If you want rug cutters there’s the funky ‘Don’t Stop Ya Lovin’ and the self-explanatory ‘Dance’; ‘Alright’ and ‘Dreams’ are the album’s sensual ballads while on the LP’s title cut Ms Falls shows her jazz licks. Modern soul fans like a dash of nostalgia too and here they can revel in ‘Old Records’. With some lovely Stevie Wonder style harmonica it’s vying with the unusual cover of Fleetwood Mac’s ‘Dreams’ as album standout. .. and if you want to really check Erica’s vocal abilities try ‘Without You’ – an acapella tour de force.