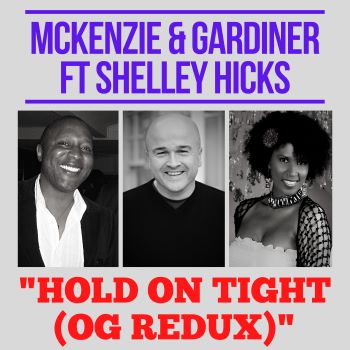 Soulsters of a certain vintage will have very fond memories of 80s UK duo, (EARL) MCKENZIE & (CLIVE) GARDINER. They go back a longway! The pair were lifelong friends who grew up together in Southall, West London, and went to school together from the age of 5 and are still mates!

Their mutual love of soul, funk and jazz inspired them to form a 7-piece band THE CLASS OF ‘78 who gigged around the capital for 3 years. At university, they slimmed down to MCKENZIE & GARDINER and started making demos. One of the tracks won a competition in Blues and Soul (remember that mag!) The prize was studio time  after which they scored a deal with Morgan Khan and his Streetwave Records. The result was the tune ‘From Time’ (which featured Jaki Graham). It had limited success but (you guessed!), years later it became a rare groove prize  fetching big bucks, and after reissue on 12” in France in 2011 there was plenty of underground interest in a revitalised MCKENZIE & GARDINER.

In 2013, 12 remastered, unreleased band tracks from the 1980s were released digitally by Headstretch Records. They included ‘From Time’ and the catchy ‘Hold On Tight’ . In 2014 Saph Records released an 8 track vinyl edition (now hugely collectable and expensive) which was followed by 15 digitally released tunes!

Encouraged by all the interest, Earl and Clive got back in the studio with original vocalist on ‘Hold On Tight’, Shelley Hicks (another old school pal, by the way!) and worked on some new versions of that song which have just been released to critical and fan acclaim.

The original 1983 mix of ‘Hold On Tight’ is included in the release package alongside two new mixes – The OG Redux and a Nickee B mix . Both new tweaks respect the 80s flavour of the original and are so, so soulfully catchy in that very special Brit funk way while vocalist Shelley Hicks has lost none of her sweet charm. The package also includes the obligatory instrumentals.

MCKENZIE & GARDINER: ‘Hold On Tight’ (various mixes) is out now and remember, previous M&G mixes sold out very quickly. We believe that there are two more singles on the way and an album… something to look forward to!