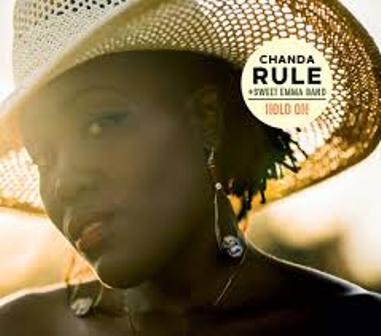 By an odd coincidence, see our previous posting, the latest album from US soul, jazz and blues singer CHANDA RULE is called ‘Hold On’.

The nine track collection is the singer’s sophomore set, following her well-received 2109 debut, ‘Sapphire Dreams’. Where that Cd was a mix of originals and covers, ‘Hold On’ offers no original material as such. Rather it’s largely a collection of traditional songs written by anonymous Afro-Americans over the years… songs that have inspired Chanda as she was growing up. The most well-known of those songs is a new version of ‘Motherless Chile’ which like the rest of the material is given a subtle update – both lyrically and musically.

The album boasts two “named authored” songs… Duke Ellington’s ‘Come Sunday’ and Albert Brumley’s uplifting ‘I’ll Fly Away’ which Ms Rule has included because as a child she had a recurring dream about flying. The song’s metaphor offers hope though much of the material is a little more pessimistic – but all the cuts (whatever the mood) are offered, she says as “a musical libation to her forebears”.

Throughout the album Chanda is backed by the equally inspired Sweet Emma Band, named for the legendary New Orleans pianist/singer. Hear them at their best on ‘I’ll Fly Away’.

Chanda Rule’s ‘Hold On’ is out now digitally with a physical release planned for July.