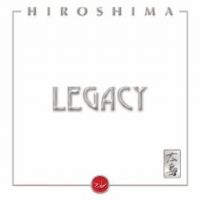 Los Angeles based jazz-fusion band, HIROSHIMA have just released what promises to be the first in a series of albums that will celebrate their thirty year existence. ‘LEGACY’ – released on Heads Up International – offers re-recordings of eleven key tunes originally recorded between 1979 and 1989. The music – a fusion of Eastern and Western styles – is maybe best represented by the Grammy-nominated ‘Winds Of Change’. Band leaders Dan and June Okida Kuramoto, however, are keen to point out that the retrospective nature of ‘Legacy’ doesn’t mean the end of the line for them creating brand new music, “… this album is actually a promise of more great music to come”, says Dan Kuramoto. Find out more at www.hiroshimamusic.com