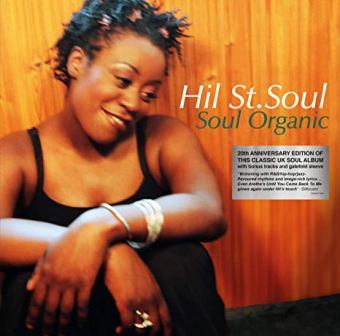 Hard to believe, yes, but it’s been 20 years since we first heard and enjoyed the talents of HIL ST SOUL via their Dome album ‘Soul Organic’. Back in 1999, Hil St Soul was a duo – Hilary Mwelwa and Victor Redwood Sawyer. Between them they crafted a wonderful take on contemporary soul that did something that back then was a rarity for a British soul record – it won the hearts and souls of American music lovers. Indeed the single ‘Strictly A Vibe Thang’ was a Billboard chart hit while the duo’s take on ‘Until You Come Back To Me’ became the most played vocal track on US Smooth Jazz radio.

The celebrate the 20th anniversary of ‘Soul Organic’, Dome are reissuing the album in that new fangled vinyl thing. The album will be a double LP in a gatefold sleeve and includes three tracks that didn’t appear on the original release and it’s out now.

Since 1999 Hilary and Victor have worked on all kinds of projects and enjoyed plenty more success. Hilary, in particular, still using the Hil St Soul brand name is always in demand as a collaborator most recently with Brian Power on his Soulhouse music outings. My guess, though, is the Vic and Hil still hanker for the magic they created on ‘Soul Organic’.