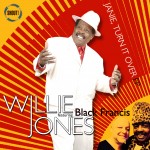 Detroit soul man WILLIE JONES isn’t a particularly well-known name – even amongst soul cognoscenti. His musical career began in the early 50s when he sang in a Detroit choir with fellow choristers Jackie Wilson, Little Willie John and Della Reese. He then went on to record with The Royal Jokers who secured a deal with Atlantic in 1955. A decade of recording singles and touring followed, and when the recordings dried up Willie continued to work the local circuit as a solo artist. Now over half a century later he’s all set to release his first album and is often the way with these things, there’s a story behind the album.

Way back in the early 60s, we’re told, Willie was visiting a friend in a Detroit hospital – hot from working, he was kitted out in splendid style – mohair suit, patent leather shoes and silk pocket hankie! In the next bed to his friend was aspiring singer Bettye Lavette recovering from the birth of her first child. They became friends and Willie introduced Bettye to his label, Atlantic, going on to write a song on the diva’s first album for the label.

Fast forward to the present as Bettye introduces Willie Jones to contemporary blues entrepreneur Jon Tiven. Impressed, Tiven whisks Jones away to Nashville to record a whole album….. ‘Fire In My Soul’, out on Shout Records on July 21st.