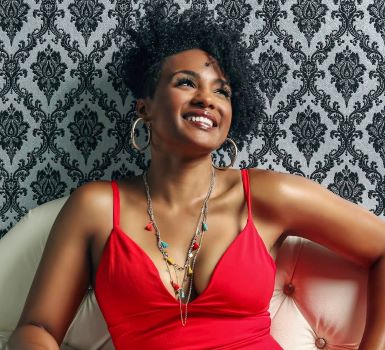 ARETHA SCRUGGS (pictured) hails from Los Angeles and is a rising soul and jazz singer. She began her career with her family gospel group – The Scruggs Sisters, containing her three sisters and two parents Melvin and Wanda Scruggs, on accompanying piano and bass. They opened for world renowned Gospel artists such as: The Clark Sisters, Commissioned, Yolanda Adams and Vickie Winans and were awarded the prestigious opportunity to sing for historical events like Rosa Park’s 80th Birthday party

Right now, as a solo singer, she’s busy promoting her debut jazz EP, called “Seasons’ from which the lead single, ‘Sunsets’ is winning support in the States. The song is a neo-soul/jazz hybrid with flavours of Anita Baker and Carmen Lundy. It’s an ethereal, intriguing, rambling  sound with a message about family values. We’re told that the EP features covers of ‘Autumn Leaves’ and Ain’t Nobody’ – interesting. In the meantime, ‘Sunsets’ is out now!