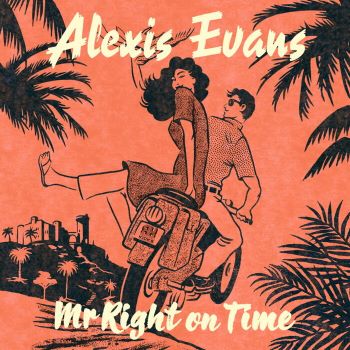 French blue-eyed soul man ALEXIS EVANS enjoys a sort of cult following based largely on his 2019 single ‘I Made A Deal With Myself’. That lovely retro flavoured single and the parent album, ‘I’ve Come A Long Way’ betrayed Monsieur Evans’ cited influences – people like the Meters, Curtis and the Impressions and Bobby Womack. Young Alexis, by the way, came to those sounds via his soul loving English father (explaining the singer’s surname).

His  fans will be delighted to learn that Alexis is gearing up to release a new album in the New Year. The set’s called ‘Yours Truly’ and in time honoured fashion, the LP’s first single is about to be released – a quirky, sonically intriguing ‘Mister Right on Time.’ Produced and mixed by Louis-Marin Renaud, we have  to say that the cut isn’t as immediate a grabber as ‘I Made A Deal With Myself’. It features odd guitar work and an ambitious production but it does grow on you with repeated plays and Alexis is in fine fettle . Yes, it’s odd in places but it’s  a big sound and a packs quite a punch!

Alexis Evans’  ‘Mister Right on Time’  will be available on all digital platforms on November 11th, 2022. The new album is set for release on February 3rd, 2023, on LP, CD and digital via Milan-based label Record Kicks.