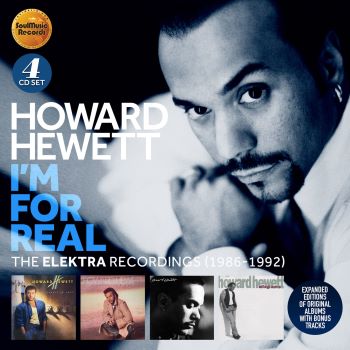 David Nathan’s SoulMusic Records continue with their quality, in-depth album examinations of key soul stars with a 4 CD, 56 track box set featuring all of HOWARD HEWETT’S Elektra Recordings – a label he was pacted to between 1986 and 1992.

In the mainstream, Howard is known for the part he played in Shalamar but soul connoisseurs know  there is much more to the man than things like ‘I Can Make You Feel Good’ and ‘Night To Remember’. This new compilation proves those connoisseurs right.

You may know that by the mid-80s Hewett’s Shalamar, who started off as a studio band created by Dick Griffey, was beset with internal tensions and after several key personnel changes, Howard decided to go solo in 1985. He scored a deal with Elektra but sordid legal issues (no time to go into them here!) delayed his first release till 1986. That album, ‘I Commit To Love’ yielded two top 10 R&B hits, ‘I’m for Real’ (R&B number 2 and for which this collection is named) and ‘Stay’(R&B number 8). His second Elektra LP was 1988’s ‘Forever and Ever’ which was followed by an eponymous set in 1990. The man’s fourth and final Elekta set was 1992’s ‘Allegiance’ .

Everything on those four albums is included in this SoulMusic box set – along with an awful lot more. Amongst the many highlights are  ‘Show Me’, another Top 5 R&B charted single, ‘Say Amen’, which is still a mainstay  of Howard’s live performances ; the duet, ‘When Will It Be’ with then-Elektra labelmate Anita Baker; a cover of the Eagles’ lovely ballad, ‘I Can’t Tell You Why’ and Howard’s duet with Stacy Lattisaw on the Motown classic, ‘Ain’t No Mountain High Enough’ which is   given an imaginative treatment.

However, it’s the bonus tracks that will tempt fans and collectors. So here you can enjoy the now hard to find ‘Let Me Be A Light Shine’ – a lovely, typical 80s duet on which Howard teams up with Roberta Flack, the vibrant  George Duke- produced ‘Obsession’ which was only available on the soundtrack of ‘The Heavenly Kid’ and, best of all, the cover of the 1958 doowop classic ‘The Ten Commandments Of Love’ which only ever appeared on 1989 compilation , ‘Rock, Rhythm And Blues’. The choice of that song and Howard’s delivery show exactly how deep his soul roots ran. Ditto his minimal vocal on another “bonus” cut – David Sanborn’s version of ‘Got To Give It Up’.