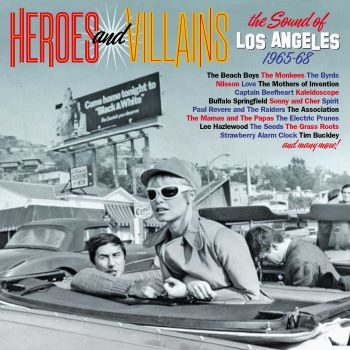 Serious 60s collectors will be delighted with a new collection from Cherry Red imprint, Grapefruit. ‘HEROES & VILLAINS’ is a 3 CD, 90 track collection which, as the album’s strap line tells us, reflects the “sounds of Los Angeles, 1965-1968”. So, yes this is a retrospective of West Coast pop and rock sounds from that seminal era, and yes, no real soul here but plenty of sunshine pop and a sprinkle of blue-eyed soul with plenty of eclectic, envelope pushing music from important and legendary bands.

The excellent sleeve notes (courtesy of Dave Wells) tell us that the music across the three discs is the West Coast’s response to the onslaught of the Beatles  on the US music scene. So, serious  musicians ditched the coy pop flavours and began (like the Fabs) to experiment and  push boundaries (sometimes with help of various “substances”). The result was an explosion of exhilarating music that still sounds vital and relevant today.

The set is, of course, named for the Beach Boys hit- though it clearly references the reputations that some of the musicians earned! Oddly, maybe, the song, ‘Heroes & Villains’ is not included. The only Beach Boys song on the set is ‘Do You Like Worms’ from the legendary Brian Wilson ‘Smile’ sessions and the track’s sound gives you the flavour of much of the album. The other “big” names on the album include the Monkees, Sonny and Cher, the Byrds, Nilson, Tim Buckley and the Association whose delicious ‘Along Comes Mary’ typifies the classic 60s West Coast, harmonic, sunshine sound.

Amongst the other featured artists are Captain Beefheart and the Magic Band, the Seeds, The Mothers of Invention, Love, Buffalo Springfield, Iron Butterfly and Del Shannon who in the mid-60s turned his back on pop to embrace more experimental rock sounds.

There’s a lot of classic/important rock/pop music on here – and for serious collectors there are plenty of unreleased at the time demos, alterative versions of the familiar and a smattering of previously unheard tracks.