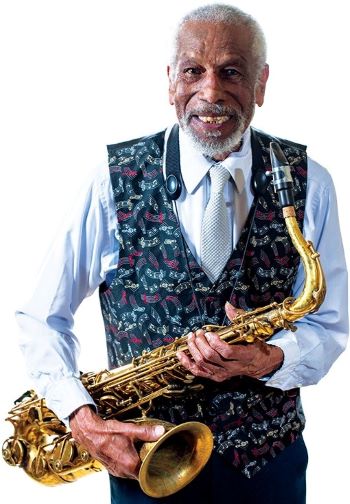 Jazz and soul saxophonist HERMAN GREEN died on Thursday 26th November. He was aged 90 and died at his Memphis home. His colleague in the band Free World, Richard Cushing, said that Green was “a truly amazing musician, caring patriarch to his family, mentor and teacher to many, and friend to everyone he met. A true treasure to all he touched with his deep musical knowledge and skill, his infectious laugh, and his zest for life and love. The City of Memphis will never be the same without his energy in the mix.”

Green started his music career playing piano in local Memphis churches before graduating to the saxophone. Amongst his first jobs was playing sax in Rufus Thomas’ talent show band. The Thomas link saw Green join BB King’s road band. By the mid 50s Green was playing the New York jazz circuit but after active service in the Korean War he worked out of San Francisco, working with people like Miles Davis, John Coltrane and Clark Terry before joining the Lionel Hampton Band.

In the late 60s Green was back in Memphis to look after his ill mother and he was soon in demand by studios like Stax, Hi and American. Indeed, his cousin was drummer Al Jackson Jr – a link that guaranteed him as much session work as he needed, and Green’s sax can be heard on numerous Memphis soul classics. He eventually began teaching music at LeMoyne-Owen College, while playing locally and crucially helping mentor several generations of Memphis musicians.

In 1987, Green joined forces with a group of Memphis State University music students, including bassist Richard Cushing and trumpeter Willie Waldman, to form Free World. The jam/improv group would continue in various forms, usually with Green as the anchor, for the next 30-plus years.

Green continued to play and perform regularly until 2018, when he was beset by health issues. This past spring friends, family and fellow musicians celebrated his 90th birthday with a socially distanced parade held in his honour.