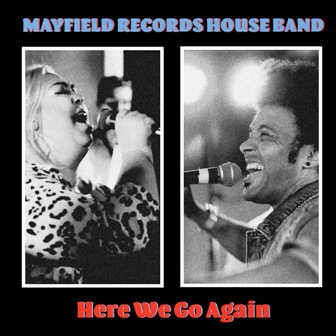 Don’t know for sure but it’s odds on that the UK MAYFIELD RECORDS set up takes its inspiration (and certainly their name) from a certain Chicago soul legend. Working out of their Portsmouth studio, Mayfield records is a collective that issues its own music and allows other aspiring artists to use their facilities and musician as and when.

Latest offering from the collective is the Northern tempo-ed ‘Here We Go Again’ single, credited to the MAYFIELD RECORDS HOUSE BAND (MRHB). It’s produced by Andy Lewis whose CV includes work with Paul Weller (there’s a surprise! The Mod father once told me Curtis’ ‘Move On Up’ was his favourite record!) and features an energized vocal duet from Amba Tremain and Decosta Boyce.

The Mayfield collective have three albums under their belts with a new one planned for 2022…. now there’s good planning! We also believe there’s an EP currently out there but in the meantime the lovely up-tempo ‘Here We Go Again’ is good to go right now!