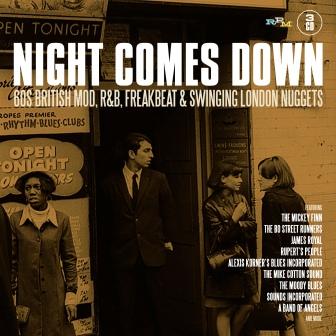 ‘NIGHT COMES DOWN’ is RPM’s latest collection of UK 60s rarities and exotica – sounds long neglected by the mainstream but revered by collectors, nostalgia freaks and mods – old and new!

The set offers 87 tracks across 3 CDs and there are plenty of soul and blues covers and other assorted tunes that were beloved by 60s mods and those who found modernism a tad later.

The collection begins with a real timepiece… 1962’s ‘Mama He Treats Your Daughter Mean’ from Lita Rosa. Ms Rosa was a Liverpool hit maker long before the Beatles; her biggest hit was the kiddies’ favourite ‘How Much Is That Doggie In The Window’ but here she injects power and home grown soul into the Ruth Brown tune. The set’s final offering is ‘The Meaning Of Love’ from soft rock outfit, Putney Bridge. Released in 1970, it’s a million miles away from the Lita Rosa track and therein lies the appeal of this album. The 87 tracks offer a sonic journey through the underground sounds of Britain in the 60s.

Between Lita Rosa and Putney Bridge you can enjoy cuts from people like Laurel Aitken, Alexis Korner, James Royal, the Moody Blues, Chad and Jeremy, The Mike Cotton Sound, Mike Patto and the Spencer Davis Group – the Stevie Winwood-less line up. There’s even a tune from supermodel, Twiggy and an off the wall version of ‘Yeh Yeh’ from the Mark Wirtz Orchestra alongside a pounding cover of Willie Mitchell’s ‘That Driving Beat’ from a Hatfield band, Favourite Sons. There’s even a brave cover of a Dells’ song; it’s ‘There Is’ from West Indian band The Shadrocks.

‘NIGHT COMES DOWN’ is out now on RPM and comes highly recommended for collectors of all things 60s.