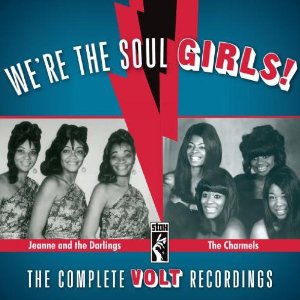 Ace Records have recently released a couple of great CDs that chronicle the careers of three of the legendary Stax label’s relatively unknown female acts. First up there a double-header entitled ‘We’re The Soul Girls!’ The album boasts a massive 29 tracks – of which the first 14 are by JEANNE AND THE DARLINGS and the rest from THE CHARMELS.

JEANNE AND THE DARLINGS were the Stax equivalent of Motown’s ANDANTES – that’s to say they were the label’s utility group – available at all times to augment other artist’s sounds and to provide slick backing vocals as required. Luckily, though, they also released six singles on the Stax subsidiary, Volt and it’s the A and B sides of those singles that form the bulk of their input here. Amongst the goodies, there’s a reading of HAYES AND PORTER’S ‘Soul Man’ as ‘Soul Girl’, a cover of CARLA THOMAS’S ‘I Like What You’re Doing To Me’ – given a SWEET INSPIRATIONS’ styling and the beautiful ‘Let Them See Me’. There’s also two previously unissued recordings – ‘I’m In Love With You’ and ‘Changes’.

THE CHARMELS featured on the very first Volt single – 1962’s ‘No Tears’ when they were known as THE TONETTES. Then after a stint at Sound Stage 7 (as THE DIXIEBELLES) they came back to Volt with the new name. Working chiefly with ISAAC HAYES and DAVID PORTER they released a number of singles and they all carry the classic Stax /Volt sound. For a little variety though try the almost Motown-esque ‘Loving Material’ and a quirky version of ‘You’ve Lost That Loving feeling’ – a touch of pre ‘Hot Buttered Soul’ experimentation from Mr. HAYES.

The second Ace/Stax “girlie” release is a little different – it’s ‘Good Woman Turning Bad’ from HOT SAUCE featuring the passionate vocals of RHONDA WASHINGTON. It’s different ‘cos it’s late period Stax and most of the music was actually recorded at Memphis’ Royal Studios with string sweetening added in Detroit. The album is an eleven tracker and the high spot is a version of JOHNNIE TAYLOR’S ‘Stop Doggin’ Me’ though the ultra sweet twosome ‘Bring It Home (And Give It To Me)’ and ‘I Can’t Let You Go’ come highly recommended too.