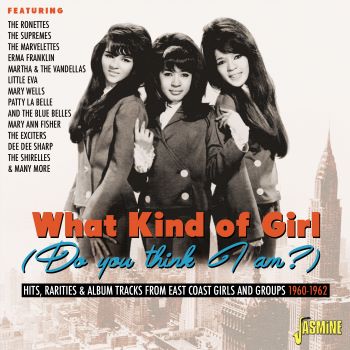 Archive reissue label, JASMINE are set to release a real treat for collectors of early soul and/or the classic girl group sound. ‘WHAT KIND OF GIRL (DO YOU THINK I AM?)’ is a 30 track collection of girl group recordings selected from labels operating on and around the East Coast of America. (Jasmine’s broad interpretation of the ‘East Coast’ encompasses New York, Philadelphia, Detroit and Chicago.)  This new album is the follow up to Jasmine’s 2017 release ‘Love Charms’  which focused on the West Coast.

All the tracks on ‘What Kind Of Girl’ were recorded between 1960 and 1962 – the golden age of the girl group sound and the compilers have managed to show that the genre offered all kinds of flavours – from coy, sweet pop/soul to searing balladry.

Naturally there’s plenty of music from the Brill Building – best typified by the Shirelles who offer their version of Goffin and King’s ‘Make The Night A Little Longer’. The writing couple’s babysitter, Little Eva, gets a trio of tracks too. They include her version of ‘Up On The Roof’ and ‘Keep Your Hands Off My Baby’ – a song that the Beatles regularly featured in their Cavern love shows. ‘Chains’ was another song that the Fabs covered; the Cookies’ original version is featured here!

The 30 tracker also offers plenty of early Motown with music from artists who were to become big names – like the Supremes, Martha and the Vandellas and Mary Wells – and some who never quite made it – like the Vells (an early incarnation of the Vandellas). Philadelphia is represented by artists like Dee Dee Sharp and the Orlons. The album opens with an early Ronettes track ‘ I’m Gonna Quit While I’m Ahead’ while the album is named for the Erma Franklin song that speaks of teenage angst and first dates – so typical of the genre.

This wonderful and charming collection is sub-titled, “hits, rarities & album tracks from east coast girls and groups 1960-1962” – a perfect summation!