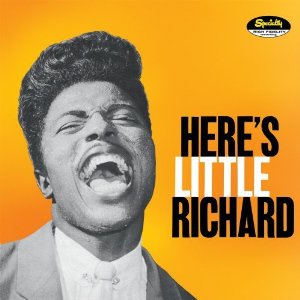 The legendary LITTLE RICHARD was never an outright soul singer… his personality was far too multi-faceted for him to be pinned down into one genre. What can be pinned down though is the mighty influence he had on the direction of popular music and that impact stems from one key release – 1955’s ‘Tutti Frutti’. That energy-packed two and a half minute single might not have been the first rock n roll record – but it certainly lays claim to being the first truly GREAT rock n roll record.

Released on ART RUPE’S L.A- based Speciality Records, the song shot to #2 on Billboard’s R&B charts and a creditable #17 pop. Rolling Stone Magazine rated it at #43 on its list of Greatest 500 Songs of All Time. More hits followed – notably ‘Jenny, Jenny,’ ‘Rip It Up’ and ‘Long Tall Sally’ (a huge influence on a young PAUL McCARTNEY). By 1957 RUPE had enough material for an album – ‘Here’s Little Richard’ and it’s that groundbreaking LP that’s just been reissued by Speciality Records in collaboration with the Concord Record Group.

The reissued album’s core consists of the original LP’s 12 tracks to which have been added demo versions of ‘Baby’ and ‘Long Tall Sally’; then there’s an extensive interview with ART RUPE and two bonuses videos… screen tests of Mr. PENNIMAN performing ‘Tutti Frutti’ and ‘Long Tall Sally’.

The pack is completed with an extensive booklet containing exclusive pictures, track details and an analytical essay from writer LEE HILDEBRAND who nails RICHARD’S impact thus: “Richard attacked the piano with incessant even-eight-note patters which was decidedly different from the shuffle rhythm drummer EARL PALMER was laying down behind him. Swing and shuffle beats had been the primary pulse of rhythm & blues until RICHARD introduced even eights that would come to drive most R&B and rock music and still do today.”

Music, though, is not just about the technicalities; it’s about life-enhancing enjoyment and back in ’57 ‘Here’s Little Richard’ served it up in spades… and it still all works!

HERE’S LITTLE RICHARD is out now on Speciality/Concord.