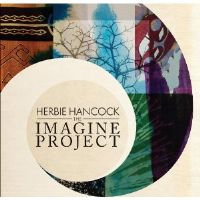 Legendary jazz keyboardist, HERBIE HANCOCK, who celebrated his seventieth birthday earlier this year, has a new album, ‘The Imagine Project,’ released on August 2nd via Sony Music. The set was recorded at different points around the globe and features colleborations with a host of stars from different musical genres – they include John Legend, Chaka Khan, Jeff Beck, James Morrison, Indie.Aria, Pink, Seal, Dave Matthews, Wayne Shorter and others.
Says Hancock in regard to the album: “Music truly is the universal language. ‘The Imagine Project’ will explore that concept across the globe, uniting a myriad of cultures through song and positive creative expression. My hope is that the music will serve as a metaphor for the actions taken by the inhabitants of this wonderful planet as a call for world harmony on all levels.”