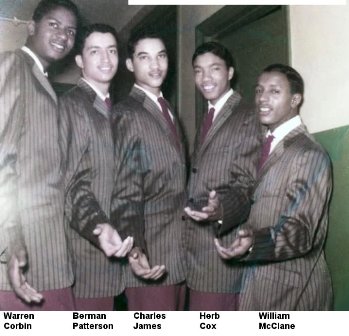 HERB COX, lead singer with doo-wop group THE CLEFTONES died on Monday 7th December. Few details are available save that Herb had been fighting Alzheimers for the last few months. He was aged 80

Born in Cincinnati in 1939, his family were to relocate to New York and it was at Jamaica High School in Queens that Herb and friends formed the Silvertones; then in 1955, renamed the Cleftones, they released their first record… ‘You Baby You’ which became a hit. Herb Cox then wrote ‘Little Girl of Mine’ and ‘Can’t We Be Sweethearts’ after a few more minor hits the group splintered into various incarnations. Cox’s Cleftones enjoyed some success with a 1962 release of the standard, ‘For Sentimental Reasons’.

ANORAK FACT: The guitarist on ‘You Baby You’ is jazz great Kenny Burrell!