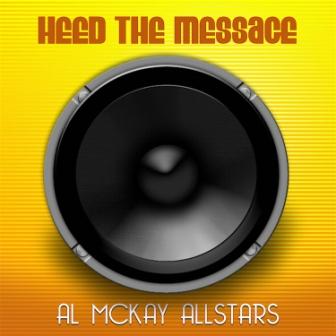 Soul fans will know all about AL MCKAY. The guitarist, of course, was an integral part of the legendary Earth Wind And Fire. Indeed he helped pen many of the band’s signature hits… things like ‘September’ and ‘Sing A Song’ and though Al’s not connected with the band’s current line up he continues to make music with his own band, THE AL MCKAY ALLSTARS. The band’s line up is Tim Owens (vocals), DeVere Duckett (vocals), Claude Woods (vocals), Freddie Flewelen (bass guitar), Ben Dowling (keyboards), Dean Gant (keyboards), Rayford Griffin (drums), David Leach (percussion), Ed Wynne (saxophone), Luis Gonzales (trumpet), Omar Peralta (trumpet), Justin Kirk (trombone) and of course Al on guitar.

The Allstars have just released a brand new single – a busy, bustling ‘Heed The Message’ which, you won’t be surprised to learn, has a real EWF flavour to it! It’s available to download right now and the good news is that the track’s the precursor to an autumn album from the Allstars, which, we’re told, will feature plenty of surprise guests!