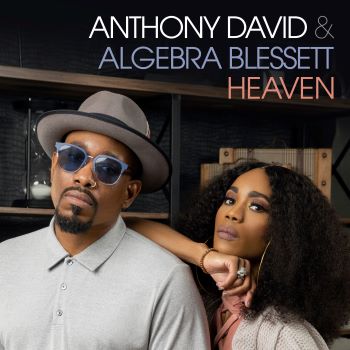 Been a while since we’ve had new music from Atlanta neo-soul man ANTHONY DAVID but with little or no fanfare, he’s just released a splendid new single – a rather special cover of BeBe & CeCe Winans Eighties hit ‘Heaven’.  And to make the recording even more special, Anthony has once more joined up with  fellow Atlantean, ALGEBRA BLESSETT.

You may remember that the duo first worked together in 2011 on the tune ‘4 Evermore’ which has since become a big wedding song Stateside.  Says Anthony: “Algebra and I really enjoy working together, both on stage and in the studio. With us both living in Atlanta our paths are always crossing. We chose this song for our first duet in a long while because it’s a feel good classic we grew up on. I like songs that give a transcendent feeling. When deciding on the arrangement and production style, producer Eddie Stokes and I were looking to strip it down and still retain the deep emotion”. And that’s exactly what’s  been achieved. Where the original was a big 80s style production, the new version is sparser, allowing the depth of the lyric to seem more impactful.