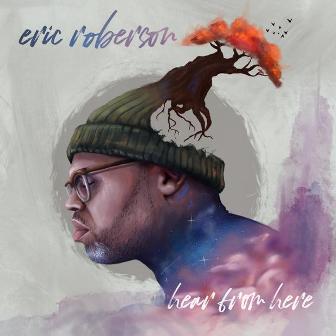 Music folk lore has it that the Beatles recorded their first album in just one day. A few years later, ‘Sergeant Pepper’ took months and months of studio work… and that soon became the norm. Recording artists began spending inordinate lengths of time (and huge amounts of money) ensconced in studios fleshing out their musical ideas.

Very recently indie soul don ERIC ROBERSON set out to buck that trend. As the coronavirus lockdown kicked in Eric took himself into his home studio in New Jersey and, with the help of others including Josh Milan, Avery Sunshine, writer-producer Dana Johnson, DJ Kemit and various members of his own band, he came up with ‘Hear From Here’, an album recorded in just a couple of weeks.  Erro describes the collection for the “quiet time” we are living through. He explains that the LP “acknowledges the situation we’re in, but also gives more than a glimmer of hope that everything will be okay. I have learned from past experiences to trust the process and look for the purpose. I found it in this album …10 songs I heard when the world was quiet.”

Opening with the self-explanatory ‘Road To Recovery’, the album unfolds into a smile-inducing celebration of what real soul music can offer in troubled times. That’s maybe at its most uplifting on the sweeping, house-tinged ‘Hurry Up’ which also features lush, wrap around harmonies – a constant feature of the album. Best ballad is the gorgeous ‘Soft Like You’ (more sweet harmonies) which heralds in a suite of slower numbers that offer hope and solace in equal parts.

‘Hear From Here’ is a quite lovely contemporary soul album which proves that lengthy studio time – pondering, doodling, editing, re-editing, etc, etc doesn’t always produce the goods. If it feels good – it probably is good – just do it. What was good for the Fab 4 in 1963 is good for Eric Robertson in 2020!

‘Hear From Here’ is out now on Dome Records.