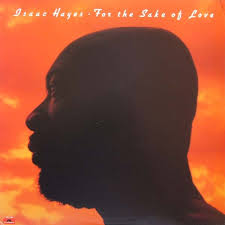 Once ‘Hot Buttered Soul’ had made ISAAC HAYES a superstar, he was nothing if not prolific. Even after he’d left Stax he continued apace pushing that wonderfully strange Black Moses persona. In the mid 70s he was pacted to ABC but later in that decade he joined Polydor.

bbr Records have just reissued two of his key Polydor sets – 1978’s ‘For The Sake Of Love’ and ‘And Once Again’ from two years later.

‘For The sake Of Love’ followed the usual Hayes album template…. that’s to say the songs are a mix of Hayes originals and well-chosen covers. Original or cover, though, Hayes and his usual arranger Johnny Allen give them the “Hayes Treatment”. Everything gets a full and lushly orchestrated lengthy workout – several with that distinctive introductory rap and all garnished with the ethereal backing vocals of Hot, Buttered and Soul. The two big covers on this album are takes on Billy Joel’s ‘Just The Way You Are’ (which clocks in at over 9 minutes and features Ike on sax too) and James Taylor’s ‘Don’t Let Me Be Lonely Tonight’. Amongst the originals tunes is a discofied version of the ‘Shaft’ theme which almost hits the ten minute mark.

Hayes was never one to change what he saw as a winning formula and ‘And Once Again’ offers more of the same. The set’s big cut is a tremendous version of the soul standard ‘This Time I’ll Be Sweeter’. The Gwen Guthrie-penned tune here gets a great Hayes intro rap which helps extend the song to over 13 minutes. Listen up too to another oft recorded soul standard, ‘It’s All In The Game’. The album’s other 3 songs were originals and include another stab at disco, ‘I Ain’t Never’. In honesty the ballad ‘Wherever You Are’ is so much better!

Both these bbr reissues come with a number of bonus cuts – mostly the 7″ mixes of the albums’ selected singles.