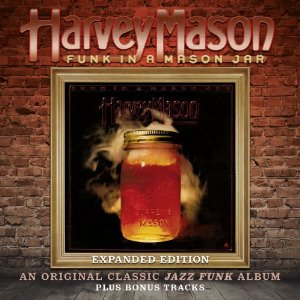 DAVID NATHAN’S soulmusic.com label has just reissued three fine albums on legendary drummer HARVEY MASON. MASON has enjoyed a long and illustrious career – playing with anyone and everyone who is anyone and, of course, he’s now a mainstay of FOURPLAY.

In the mid ’70s he was signed as a solo artist by Arista Records – where he recorded five albums and it’s three of those that have just hit the racks again. They are – 1976’s ‘Earthmover’, ’77’s ‘Funk In A Mason Jar’ and ‘M.V.P.’ from 1981. They all feature MASON’S distinct brand of jazz fusion and soul-based dance grooves and –as ever with soulmusic.com albums – the three CDs all include in-demand bonus tracks.

Read SJF’s review of ‘Funk In A Mason Jar’: http://www.soulandjazzandfunk.com/reviews/1463-harvey-mason-funk-in-a-mason-jar-expanded-edition-soulmusiccom.html

Also, SJF hopes to speak to Mr. Mason about those reissues very soon so keep your eyes peeled for an in-depth feature on one of jazz-funk’s finest drummers.