HARVEY GIVES US WHAT WE WANT… 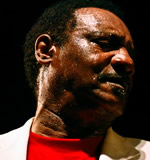 The small but perfectly formed UK based SOUL JUNCTION RECORDS kick off their 2012 release sheet with a corking single from soul veteran HARVEY SCALES.

HARVEY’S been making music since the 60s when he was associated with the early work of the ESQUIRES in his home town of Milwaukee. After one single as TWISTIN’ HARVEY (‘The Clock’ on the Sauk City Cuca label) he led his own band THE SEVEN SOUNDS who recorded for Sauk City Cuca and Magic Touch. While working in the famed Phelps Lounge in Detroit, HARVEY came to the attention of DON DAVIS of Groovesville Records who signed him up as a writer and producer. As writers the duo enjoyed considerable success – most notably with JOHNNIE TAYLOR’S ‘Disco Lady’. In the meantime SCALES continued to record with labels like Cadet, Mercury, Stax, Casablanca and Kashgold but his performances never quite took him into soul’s major league.

In 1998 HARVEY recorded an album for Home Of The Blues and it’s from that album that Soul Junction has selected the BOBBY WOMACK flavoured ‘Giving U What U Want’ as their first single of 2012. The cut rolls along grittily in the best WOMACK tradition and comes complete with a moralising introductory monologue. For the B-side Soul Junction have gone for a previously unissued SCALES recording from the late 80s. Surprisingly, given that date, ‘I’ve Been A Fool (To Fool Around)’ has a similar WOMACK styling to it. Again it features an opening monologue and it’s bound to please real soul fans everywhere. The single is currently available in 7″ vinyl and you can learn more @ www.souljunctionrecords.co.uk