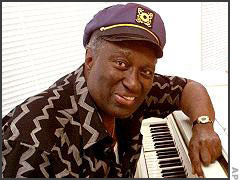 American news agencies are reporting that all-round soul pioneer HARVEY FUQUA has died in a Detroit hospital from a heart attack. He was 80.

FUQUA, who was born in Louisville, Kentucky on July 27, 1929, had a long, varied and distinguished soul career. With friends from Louisville he began that career in a doo-wop vocal group called CRAZY SOUNDS. After working with notorious DJ ALAN FREED they changed their name to the MOONGLOWS and recorded for his Champagne label. After a spell with Chance Records, the group were signed to Chess where they enjoyed a smash hit with ‘Sincerely’. Later recording as HARVEY AND THE MOONGLOWS, sometime group members included, MARVIN GAYE and CHUCK BARKSDALE. In 1958 HARVEY left Chess to join Anna Records in Detroit where he worked with LAMONT ANTHONY (DOZIER) and JOHNNY BRISTOL. In 1961 he started his own labels – Tri-Phi and Harvey whose rosters included the SPINNERS, JUNIOR WALKER AND THE ALL STARS and SHORTY LONG.

Frustrated by the problems of running a small, indie label he joined BERRY GORDY’S Motown Empire as head of the Artists Development department. Though that section was charged with grooming the artists’ performance, FUQUA got to write and produce too – most notably with the SPINNERS and JUNIOR WALKER (who he brought to Motown) and DAVID RUFFIN and MARVIN GAYE and TAMMI TERRELL. FUQUA’S influence can also be heard on GAYE’S production work with the ORIGINALS and his own ‘What’s Going On’, which featured the distinctive “blow harmonies” that GAYE had learned during his stint with the MOONGLOWS.

In 1971 HARVEY FUQUA joined RCA where he worked with h the NITELIGHTERS and NEW BIRTH. In 1972 he reformed the MOONGLOWS and ten years later he was working with GAYE again on his ‘Midnight Love’ project. In 2000 FUQUA started a new label – Resurging Artists Record ad released an album ‘TVOX – The Voice Of Experience’ and he was made a Trustee of The R&B Foundation… and no on would argue that he wasn’t perfectly suited to the role.