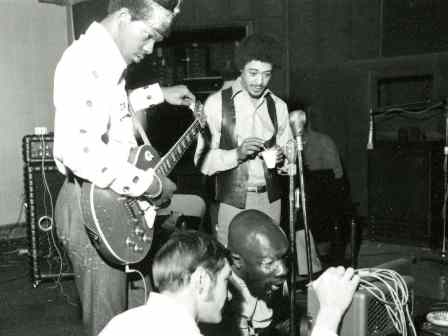 Without doubt, it’s one of the most striking and memorable guitar passages in the soul canon… we’re talking about the haunting riff (then the solo) that runs right through Isaac Hayes’ epic, 12 minute version of ‘Walk On By’. Sadly, we’ve learned that the creator of that magic – Memphis session player, HAROLD BEANE died last weekend aged 73. Jeff Kollath, executive director of the Stax Museum of American Soul Music, confirmed the news saying that Beane had been hospitalized for the past few weeks.

A Memphis native, Beane got his first big break working with Stax stalwart William Bell in the late 60s. He’d met Bell whilst working in Stax’s Satellite Record shop. The Bell connection opened the door to lots more session work at Stax culminating in the ‘Hot Buttered Soul’ sessions (Harold is pictured with Hayes in our picture above).

Beane went on to work with Al Green before being coaxed into the George Clinton “mothership” – working with Funkadleic for over 15 years!

Beane eventually settled in Atlanta, and left music to work for IBM… though music was never far away as that famous guitar solo was sampled over and over by a new generation of artists. In 2011, he returned to Memphis and started playing music again, often on Beale Street with blues band, Elmo and The Shades.

Last September, Beane made his last major public appearance at the Stax Museum as part of an event celebrating the “Masters of the Soul Guitar.” Beane, who had been hospitalized just days earlier, performed from a wheelchair, delivering the ‘Walk On By’ solo and playing Parliament’s ‘Maggot Brain’.