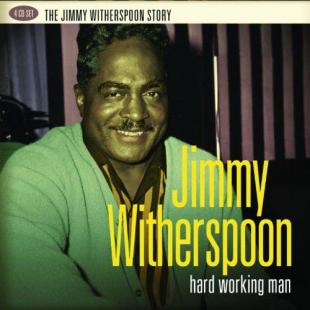 Blues shouter JIMMY WITHERSPOON enjoyed a garlanded 50 year long career. Born in Arkansas in 1920, his musical journey started in the army, where he worked with the US Armed Forces Radio Service. He made his recording debut in 1945 with the Jay McShann Band and soon enjoyed a hit with ‘Ain’t Nobody’s Business’… a song that became his signature tune. Witherspoon recorded consistently though the 40s and 50s and he worked with many blues and jazz giants including Woody Herman, Ben Webster, Earl Hines, Coleman Hawkins, T Bone Walker and Groove Holmes.

In later years he collaborated with artists across a number of genres…. with people like Van Morrison, Eric Burdon, Jimmy Smith, Joe Sample and Count Basie. Witherspoon died in 1997 and many jazz commentators regard him as the premier male Jazz- Blues singer of all time.

Proper Records have just released a wonderful 4 CD box set that focuses on the early part of Witherspoon’s career. ‘Hard Working Man’ is the first comprehensive overview of Witherspoon’s early career and it contains a massive 100 tracks – including, of course, ‘Ain’t Nobody’s Business’. The box also contains an extensive 28-page booklet recounting the story of his life and his musical career, together with rare photos and complete discographical information.