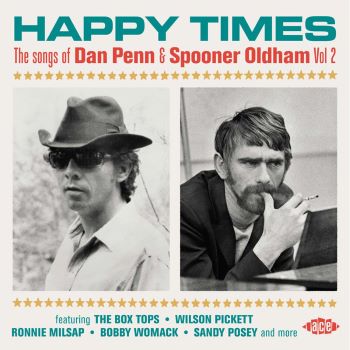 The names of Dan Penn and Spooner Oldham need no explanation to collectors of Southern soul. Indeed, even casual soul fans will have come across the pairing dozens of times. They were (indeed are) bastons of the Muscle Shoals and Memphis music scenes and working together at both Muscle Shoals’ FAME Studio and Chips Moman’s American Studios in Memphis they wrote (and produced and played on) countless hits across all kinds of musical genres.

Over the years Ace Records has celebrated the duo’s achievements with a series of acclaimed compilations of their individual output and their work as a pairing. Way back in 2011, they issued an overview of some of the pair’s best writing and production work and now some 9 years later the label has, at last, gotten round to issuing another selection of Penn and Oldham collaborations.

This new 24 tracker is named for the Box Tops’ 1967 outing on Mala Records. ‘HappyTimes’ is a catchy, poppy little thing but more importantly it earned Dan and Spooner plenty of royalties… it was the B side to the Box Tops smash, ‘The Letter’! ‘Happy Times’ is one of several non-soul–specific cuts on the album. As we said up top Penn and Oldham’s work crossed genres and here you can enjoy stunning contributions from  country stars like Bobby Bare, Ronnie Milsap, Sandy Posey alongside some cute pop from a young Merilee Rush and girl group, the Goodies.

For sure there’s lashings of classic soul here too. Amongst the featured soul artists are people like Bobby Womack, Bill Brandon, the Ovations, Percy Sledge, Wilson Pickett, Arthur Conley, Dee Dee Sharp and James and Bobby Purify. As you’d expect their contributions are Southern flavoured, but Penn and Oldham could do “uptown” with the very best. It’s no secret that they were big fans of the Motown sound and here, their ‘Destroyed’ by the Yo Yo’s is an unashamed homage to the Holland-Dozier-Holland sound.  And to prove that Penn and Oldham had a sense of humour too try ‘Big Louie’ from UK singer Guy Darrell. Learn all about Louie’s Yo Yo and just what he could do with it!!!

HAPPY TIMES … the songs of Dan Penn and Spooner Oldham volume 2 is out now on Ace Records.