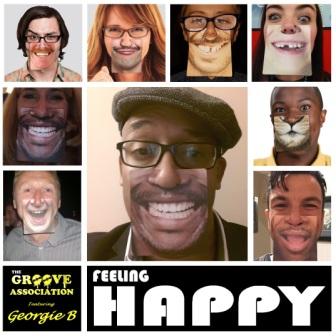 ‘Feeling Happy’ is the latest single from GEORGIE B’s GROOVE ASSOCIATION. Knowing UK soul fans know all about GEORGE BROMFIELD (Georgie B) and his collective. Over the years, without massive publicity and huge fanfares, they’ve won the hearts of soul lovers wherever they’ve played while their recordings are eagerly anticipated. Those with long memories will know that George started in the 80s with Second Image and apart from his own work he’s collaborated with people like Womack & Womack, Bobby Womack, Joe Sample, Wilton Felder, Jean Carne, Maze, Rod Temperton and Paul Weller.

‘Feeling Happy’ offers up Georgie’s optimistic take on the modern soul sound and it comes in two mixes – the “R&B” mix and a “steppers” mix with not much to choose between them. George tales lead and he’s ably supported by protégé Deborah Bell who earlier this year enjoyed success with her Georgie B produced version of the old Jaki Graham number ‘Round And Round’.

Both songs, by the way, are only available on Georgie’s own official web site www.georgiebmusic.com