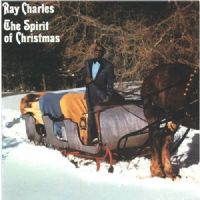 You know Christmas is imminent when record store racks start to groan under the weight of Christmas albums – old and new. Amongst the best of this year’s crop is ‘The Spirit Of Christmas’ from RAY CHARLES. The album (released on Decca) was originally released in 1985 but has long since been deleted. The new issue has been digitally remastered and features one track that has never previously been available – ‘Baby It’s Cold Outside’ – a CHARLES duet with BETTY CARTER. Other featured songs include BROOK BENTON’S ‘This Time Of Year’, the classic ‘Winter Wonderland’ and an unusually soulful version of ‘Rudolph The Red Nosed Reindeer’! This was the only Christmas album that RAY CHARLES recorded and with sidemen of the calibre of FREDDIE HUBBARD, KEVIN TURNER, RUDY JOHNSON and the RAELETS, this might be the only Christmas album you need.