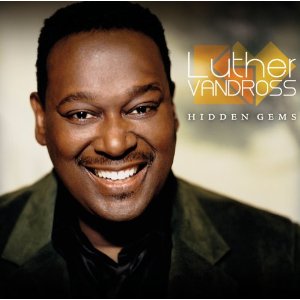 The late, great LUTHER VANDROSS would have been 61 on April 20th…. to commemorate his birthday, Epic/Legacy are releasing a new 15 track album – LUTHER VANDROSS: HIDDEN GEMS. The long player is a collection of seldom-heard album tracks and movie soundtrack songs.

In the liner notes written by LUTHER’S life-long collaborator FONZI THORNTON, ‘Hidden Gems’ is described as “a deeper dig into the musical treasure trove of LUTHER VANDROSS, uncovering lesser known songs and performances that he endowed with the same passion and love as his well known repertoire.”

The album was compiled and produced in association with LUTHER’S family, his niece SEVEDA WILLIAMS and cousin BRENDA SHIELDS, in order to present “an album compilation with a different theme his fans might enjoy, a collection which highlights LUTHER’S ideas of song selection and how they complement THAT VOICE.”

Amongst the featured tracks are ‘You Stopped Loving Me’, ‘Once You Know How’, ‘I Know You Want To’ and the MARTHA WASH duet ‘I (Who Have Nothing)’ while the hard-to-find movie songs are ‘Heart Of A Hero’ (from 1992’s ‘Hero’, starring DUSTIN HOFFMAN), and ‘The Thrill I’m In’ (from 1995’s ‘Money Train’, starring WESLEY SNIPES).