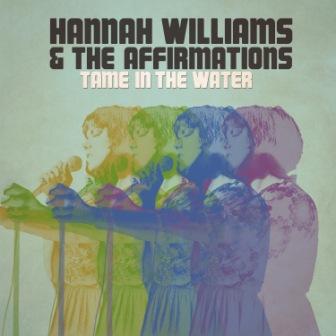 Big voiced HANNAH WILLIAMS first came on SOULANDJAZZANDFUNK’S radar back in 2012. At that time she was fronting a funk combo, the Tastemakers and together they were promoting their debut long player, the enigmatically titled ‘A Hill Of Feathers’. People like Sharon Jones and Craig Charles championed it. On the back of the album Hannah and the band found plenty of work both here in the UK and over in Europe.

Right now Hannah’s getting set to unleash a brand new long player…. ‘Late Nights & Heartbreak’ from which the lead single, ‘Tame in the Water’ is winning air play on the funkier soul stations. Interestingly, this time around Hannah’s band have anew moniker, The Affirmations. We’re not sure if they’re a totally new bunch, remnants of the Tastemakers, or indeed the Tastemakers with a new name! Whatever, the sound is much the same… gritty, modern funk fuelled by punchy brass and fronted by Hannah’s fiery vocal.

The single is out now on Record Kicks.